Change
The Porsche 911 is one of the greatest sports cars ever made, encompassing a distinct silhouette which is remarkably similar to that of the original created back in 1963. With each new generation of the 911, Porsche has continuously pushed the sports car envelope. Today, we are spoilt for choice when it comes to ultra-powerful, state-of-the-art 911 models and we are therefore thrilled to have three of the latest 'ultimate' 911 models side-by-side, in stock at our Wolverhampton Porsche centre.

The 911 GT3 was introduced in 1999, as a variant of the '996 generation' of Porsche 911. Essentially a race car for the road, the GT3 featured a large rear wing, more aggressive aero styling, bucket seats and weight saving initiatives such as removing the rear seats, radio, air-con and sound deadening (yet buyers could specify their GT3 with air con and radio if preferred). Despite the more focussed approach, each GT3 still adopted a superb level of engineering and quality, and was still as fine a car to drive on road as it was on the track.

The 997 and 991 generation 911 GT3 models which followed were introduced in 2006 and 2013 respectively. Interestingly, although the GT3 was very much a race car for the road and came with a manual gearbox - a purists favourite - when Porsche released the 991 generation GT3, the legendary manual gearbox was no more, instead the car using Porsche's PDK double-clutch automatic, paddle-shift gearbox. At the time it was a controversial decision, yet enthusiasts, motoring journalists and buyers quickly released this wasn't an issue at all, and instead ensured the car's power and handling capabilities could be utilised fully.

Our car is indeed a first generation 991 GT3 (991.1) and despite the lack of a manual gearbox the GT3 is nothing short of mesmerising to drive, with astonishing performance thanks to a new direct injection flat six 3.8-litre engine, producing 468bhp. 60mph is dealt with in just 3.5 seconds and unlike many manufacturers adding turbochargers to their engines of this era for this level of performance, the 991 GT3 is still naturally aspirated. Throttle response is therefore instantaneous and is one of the many characteristics which is highly desirable for purists and enthusiasts alike.

The GT3 is undoubtedly special, but seems rather subtle in its race car-like approach. It manages to combine aggressive, race car looks without being too over the top. A classy approach to high-end track performance.

For reference, the Porsche 911 (991.1) GT3 lapped the infamous Nurburgring Nordschleife in 7 minutes 25 seconds. 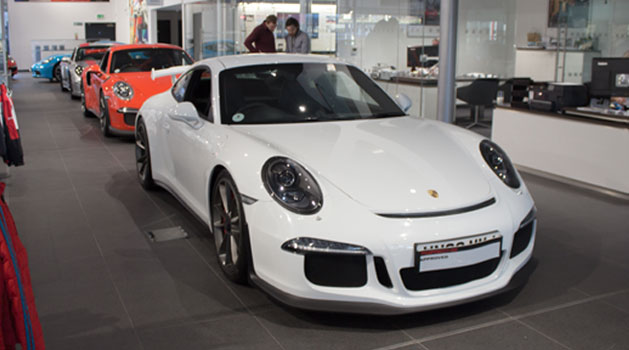 Unlike the GT3, the GT3 RS is anything but subtle. Side by side, the GT3 RS looks a lot more hardcore with its XXL 911 Turbo body, plus further enhancements such as a much larger rear wing, aggressive louvers above the front wings and large intakes in the rear wings which are bespoke to the RS. It may look a lot more like a race car with number plates, but this is one serious piece of engineering - there is even a roll cage for the full race car feel.

The RS name has been applied to ultra-fast Porsches since the seventies, with the legendary Carrera RS, yet it wasn't until 2003 that the GT3 RS was born as part of the 996 generation. Again, 997 and now 991 GT3 RS models have been released and with each generation become more advanced and continually push what's possible of the RS moniker.

The RS is of course the flagship GT3 model, and with other unique features over the regular GT3 such as a magnesium roof, carbon fibre used throughout and full bucket seats that replicate those found in the incredible Porsche 918 Hypercar, this is one of the most special 911 models out there.

In yet another controversial specification option, the GT3 RS only came with a PDK gearbox, despite previous generation RS models coming with manual gearboxes. This is perhaps obvious, due to the 991 generation GT3 also only available in this guise.

Suited to a track, the RS lapped the Nurburgring Nordschleife 5 seconds quicker than the GT3 - with a time of 7 minutes 20 seconds. The RS certainly lives up to its name, as in Porsche terminology, RS stands for Rennsport; German for racing. 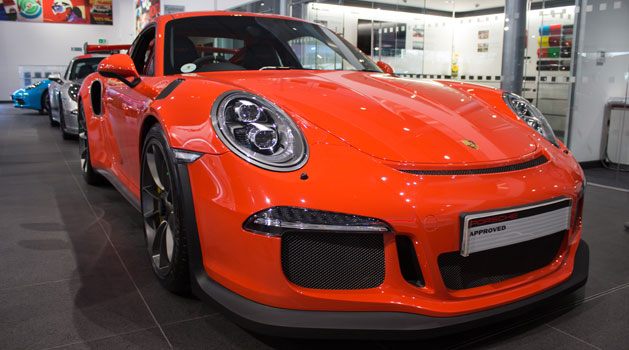 Alongside the two GT3 911 variants, the 911 R looks incredibly subtle, like a standard 911 Carrera even. Closer inspection sees a GT3 front bumper, but you'll spot no rear wing like the other two. The stripes upon the body are an indication this is not just a regular 911 and the more you look, the more detail you start to appreciate. The R name also suggests higher performance over a standard 911.

The 911 R was launched after the GT3 and GT3 RS in 2016. It caused quite a stir upon launch, mainly due to one stand out feature - the manual gearbox.
Interestingly, the 911 R blends features from both the GT3 and GT3 RS - so much so that metaphorically, this is almost like a greatest hits version of the GT3 variants.

Using the GT3 body without the aero (rear wing), but utilising the GT3 RS magnesium roof, carbon fibre bonnet and wings - but without the louvres. The GT3 RS 4.0-litre engine is also used, meaning 493bhp is available - good for 60mph in just 3.8 seconds.

Prices for pre-owned examples have increased significantly since launch. It has been dubbed as the ultimate drivers' 911, due to the wonderful 6-speed manual gearbox, which purists missed in the GT3 and RS models, so when Porsche launched the R, it was a renaissance moment. The limited production and rarity have also served to see values sky rocket beyond imagination.

The R doesn't scream race car either, it's more of a car you just want to find yourself in on a deserted Denbigh Moors B-road, making use of the characterful, naturally aspirated, free revving engine and the beautifully crisp manual gearbox. Various weight saving initiatives have been adopted elsewhere too such as carbon shelled bucket seats, no rear seats, no roll cage, and polycarbonate rear and side windows.

The Nurburgring Nordschleife time has never been officially released by Porsche, as the R was about driving purity and not lap times - these are ably taken care of by the GT3 and RS.

Each car has its own unique presence; choosing just one of these cars to take home is near impossible. It all comes down to personal taste and preference. However, one thing is for sure: the 911 continues to set the blueprint as the perfect sports car. 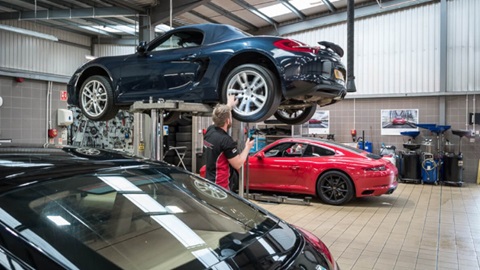