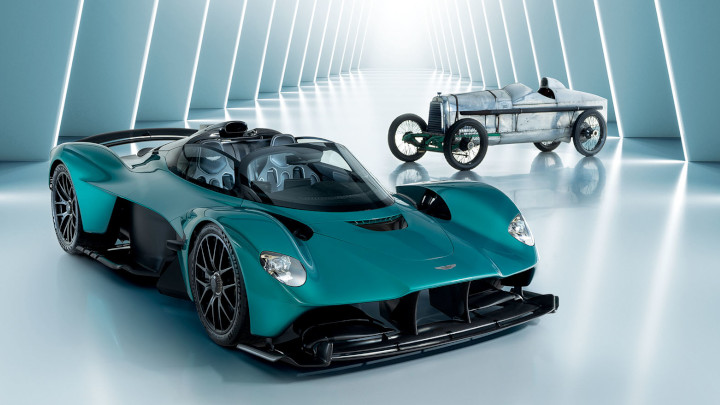 Aston Martin is celebrating its 110th anniversary with a year of events that mark the iconic British brand’s past, present, and future.

On Sunday, January 15 it is exactly 110 years since founders Lionel Martin and Robert Bamford officially formed the partnership that went on to create the first Aston Martin car, starting more than a century of automotive intensity, cutting-edge British innovation, and high-octane racing success.

Born on the track and inspired by its founders’ passion for racing, Aston Martin has risen from humble beginnings in a small workshop on Henniker Mews, London to become one of the world’s most renowned automotive marques, synonymous with inventive design, luxurious craftsmanship, thrilling performance and scarce exclusivity.

In photographs released to mark the anniversary, Aston Martin has brought together two of the most iconic and innovative models from its 110-year bloodline, highlighting the brand’s commitment to pushing the boundaries of performance and applying engineering from Grand Prix racing to the road.

One of the brand’s oldest surviving racing cars, the record-breaking 1923 racer Razor Blade is pictured alongside the uncompromising Aston Martin Valkyrie hypercar.

One of the earliest cars to be specifically designed with aerodynamics in mind, and propelled by an Aston Martin Grand Prix specification engine, the trailblazing Razor Blade took numerous class records at Brooklands in 1923, a year on from Aston Martin’s Grand Prix debut with TT1 – the car nicknamed 'Green Pea'.

A century later, Aston Martin continues to innovate with its thrilling high-performance models, bringing modern Formula One engineering to the road through its era-defining Aston Martin Valkyrie.

The brand’s historic 110th anniversary is to be celebrated through the launch of a new, strictly limited, exclusive Aston Martin model, to be unveiled later this year.

The milestone will also take centre stage of this year’s British Grand Prix at Silverstone, Goodwood Festival of Speed, Pebble Beach Concours d'Elegance and other major events across Aston Martin’s key regions, as part of a global marketing campaign entitled ‘Intensity: 110 Years in the Making’.

2023 promises to be a monumental year, as Aston Martin prepares to unleash the first of its highly anticipated next generation of sports cars, which will further enhance Aston Martin’s focus on ultra-luxury, high-performance and driving intensity.

Amedeo Felisa, chief executive officer of Aston Martin Lagonda, said: “In 1913 Lionel Martin and Robert Bamford came together with a shared vision of racing cars and using learnings from the racetrack to push the boundaries of automotive innovation.

“110 years and little over 110,000 cars later, that spirit continues. Our 110th year promises to be just as exciting as our first, as we turn a new chapter in Aston Martin history with the launch of our next generation of sports cars and the reveal of an extraordinary special model later this year that will celebrate this unique milestone.”