The meet officially opened at 10am, and ran through till 4pm. Despite the weather doing its best to put off the crowds, the visitor park welcomed a selection of stunning supercars, classic cars and performance cars. Before long, the visitor car park was full of spectators whilst show cars of all genres kept on arriving to be showcased within the grounds of the visitor park.

The fact that the meet took place next to the airport runway made for quite a spectacle. Porsches, including the fantastic GT3 RS, Ferraris such as the F430 and McLarens including the 570S looked even more impressive, especially with planes of all types taking off behind them on the Manchester Airport runway. Throughout the park other unique vehicles could be seen lined up next to one another, which included the much-loved Renault Clio V6, various R34 Skyline GT-Rs, a striking Honda NSX and even an original first-generation BMW M5 along with the original BMW 8 Series.

Although the weather wasn’t as hoped, visitors conveniently flocked indoors to see an incredible line-up of cars scattered underneath one of the greatest aircraft to have ever flown; Concorde. On the day you could even take a tour of this magnificent aircraft, with tours taking part throughout various parts of the event.

The centre piece, however, had to be the car sitting under the main fuselage of the Concorde. This was the incredible Stratstone Lightweight Jaguar E-Type. Worth in excess of £1.5million, it attracted a lot of attention throughout the day – more so due to its incredible beauty than its hefty value.

Despite the weather, the day was a fantastic success, and we hope to create more events like this in 2018. Keep updated by following Stratstone and Car Café on social media.

Take a look at the photos to see highlights from the first ever Car Café XL. 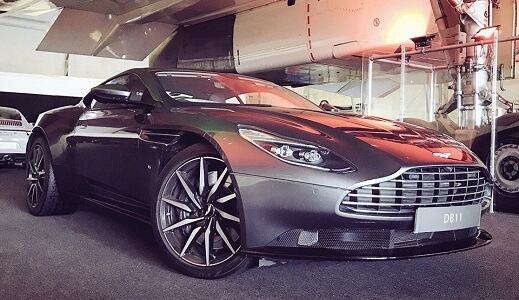