With free tea and coffee on hand, and the alluring smell of a breakfast sandwich, it proved to be the perfect way to start the weekend for the avid car enthusiast. It was also so busy that it happened to be the most popular Car Cafe ever with over 300 cars and hundreds more spectators turning up on the day, over-spilling into the neighbouring car park.

What is a car meet without the odd supercar? 'Odd' being a little misleading, as a healthy selection of the supercar elite attended the first Nottingham Car Cafe of 2018. The incredible 'Beast of the Green Hell', aka the Mercedes-AMG GT R is famed for lapping the infamous Nurburgring Nordschleife in just 7minutes and 10 seconds, setting a rear-wheel-drive production car record.

The beastly AMG was joined by one of McLaren's latest supercar masterpieces; the ultra-state-of-the-art 720S. It was surrounded by people throughout the meet due to its incredible dihedral doors, bespoke looks and endless carbon fibre on display. Elsewhere, a classically unsubtle Lamborghini Aventador looked great in bright orange, is there really any colour other than orange to have a 'Lambo' in? Check out the Top 5 Supercars of the event here.

Japanese cars are always well represented at Car Cafe, and Skyline fans were treated to each generation Godzilla, from the R32 and R33 to the R34 and R35 versions. Famed for hunting supercars, every generation of the GT-R is always a welcome sight for petrolheads. Bayside Blue is perhaps the most famous Skyline colour and a mint example was in attendance, yet an R33 GT-R was finished in a bespoke colour that the owner was keen to keep tight-lipped about proved equally as popular.

Similar at first glance to 'Millennium Jade' - another famous Skyline colour - it's only when you get up close and personal that you discover this is far from that iconic colour. When the sun hits this particular R33, the paintwork is nothing short of stunning and was a superb addition to the selection of cars on show. 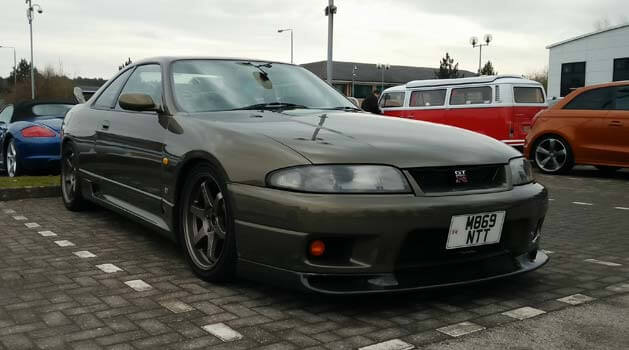 Who doesn't love a hot hatchback? Affordable performance, with some of the latest editions offering supercar-scaring speed, the Nottingham Car Cafe meet had its fair share of new and classic hot hatch heroes. An incredible Renault Clio V6 was one of the stand-out examples, finished in silver with some tasteful enhancements which received many admiring glances.

Parked behind this striking Clio was another V6 hot hatch, a much subtler Golf R32, which was one of two examples in attendance. Elsewhere, the much-loved Golf GTi was also represented in many variations, including two iconic MK2s. One which had been tastefully modified finished in classic 'Mars Red', parked next to an immaculate stock example finished in 'Royal Blue', it made for an interesting comparison, pleasing purists and tuners alike. From classics to the modern hyper hatch - the Audi RS3 being perhaps 'too hot' to be called a hot hatch. Whatever you regard it as, a mint Nardo grey example joined the meet and looked superb parked next to some other high performance German machinery. 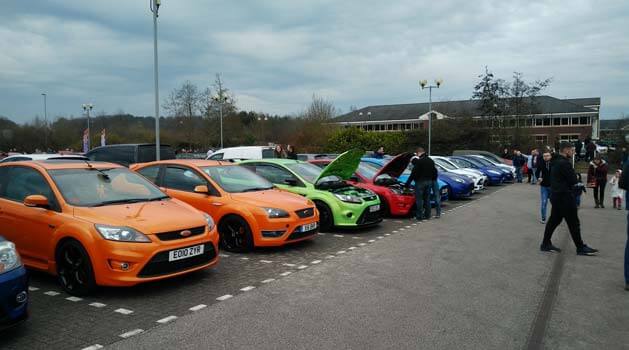 Yas Marina Blue, Sakhir Orange, San Marino Blue, Lime Rock Grey. Just some of the BMW M4 colours that were on display at Car Cafe. It was so busy that the gorgeous San Marino Blue M4 CS - the latest range-topper in the M4 model series was admired in the overspill car park. These incredible super coupes are always popular at Car Cafe meets but seeing two examples of the CS version was a treat for the avid BMW M fan. With driver focused rear-wheel drive, dominating looks and the legendary M Car status, it's no wonder.

These were joined by the brand-new M5, kindly brought over by Stratstone BMW Derby, looking almost subtle, finished in Black Sapphire. With modern M cars dominating, it was also a treat for BMW fans to see a classic BMW 8 Series; an 840Ci Sport, which could only be described as immaculate and despite its age, still looks incredible. 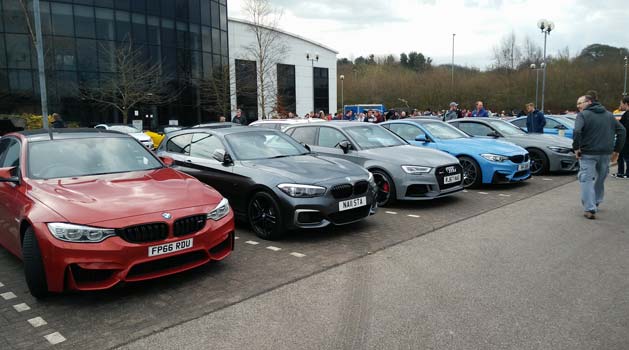 The iconic V8. Who doesn't love the V8? With an eclectic selection of muscle cars on display, all three major players in the muscle car game could be enjoyed. The Ford Mustang, finished in incredible Grabber Blue was joined by the latest Chevrolet Camaro SS.

And let's not forget the Dodge Challenger, with a bright orange and matt black version enticing petrolheads all morning. These were joined by the legendary Corvette sports car, which some argue is a supercar. When it looks this good, who really cares?

We cannot wait to see what turns up to Nottingham Car Cafe 2018 in May. Be sure to follow Car Cafe on social media to see all the latest photos from April's record meet.