We caught up with the Top Gear presenter as he prepared to head out for his first session in the Stratstone Jaguar Lightweight E-type at Le Mans Classic.

How did you get involved in driving the Stratstone Lightweight E-type?

I’ve known Dan Connell at Jaguar for years. He said: “Let’s see what we can do about getting you in the Lightweight E-type.” So, I said: “Oh, go on then”. The main Top Gear programme is the highest profile thing I’m working on right now, but we’re also developing a platform through Top Gear for shorter web videos – things like this Le Mans Classic weekend, which wouldn’t be a natural fit for the main Top Gear TV show. Making that sort of stuff is where I came from. Short-form Top Gear web videos have really got the capacity to go big, though – the first one just went live a couple of weeks ago, and the number views are not far off the TV show.

You’ve worked with Pearsons Engineering – and team boss Gary Pearson – before, sharing cars with him at Goodwood…

Yeah, we also shared a D-type in the 2014 Le Mans Classic. He is absolutely the best in the business. People use the word unique too much, and get it wrong. But Gary is someone who is unique in prepping the cars to an incredible standard, engineering them to an incredible standard, and then gets in the cars and drives them to a very high standard. There is absolutely no-one like him – he’s the man. So we’re very lucky to be having him running this car.

You’ve done a fair bit of modern and historic racing. Do you have a preference?

The grass is always greener. When I’m in an E-type, and they’re moving about and sliding, you feel so alive – but I’m thinking I wish I had the brakes in my Blancpain Bentley Continental GT3, which is what I race most of the time. When I’m in the Bentley, I’m wishing it would slide around like a classic car. So, I like them both. But, if I could only do one, I’d do the classics.

Everyone has their own take on what makes Le Mans special. What’s the personal appeal of Le Mans for you?

Life for me is a series of boxes you have to tick, and if you’re into cars, just being able to drive a parade lap of the circuit in a street car is a very special thing – a once in a lifetime achievement. To think I actually get to race around here is extraordinary. People forget that the full Le Mans circuit is mostly public roads round the back, so it’s only twice a year, every two years that you can get to race year, and if you’re not a factory LMP or GTE driver in the main Le Mans 24 Hours, this is the only other opportunity. Not many people get to do this, so it’s a real privilege. And it is a real big balls circuit – very fast, high risk.

What are you impressions of the Stratstone Jaguar Lightweight E-type, now you’re getting ready to race it?

It’s utterly, utterly beautiful. It’s one of those cars where you read the news story, and think it’s a £1m car, there’s all the debate about its eligibility for classic racing events, and it’s not a street car – it’s neither fish nor fowl, you can be very cynical. But, when they launched it in Berkeley Square and you saw it under the lights, it’s clear it’s the genuine article. If you look at one of Gary Pearson’s other mint-example original E-types, it looks exactly the same. It looks like it’s come directly out of the Jaguar factory – that’s the key thing.

Finally, how have you found your first year of Top Gear?

My first series has been really exciting – a real rollercoaster ride. But we’re now in a good place going into series two. I was really pleased to be a part of it, particularly because I got to do the stuff I like, and that I know I can do well. I was really keen not to do the challenges, because what I enjoy doing most is being on my own, skidding a car round. Having stuff that I know I can already do, then adding the skills and the resources that the BBC can throw at it was absolutely stunning. It has been really special. 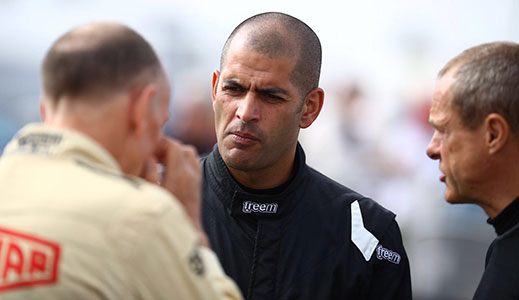 Timelapse Of The Build

Lightweight No. 15 is Built by Hand in Jaguar Classic's Browns Lane Workshop