Over the years, Aston Martin has created some very special cars, including the Victor, Vantage GT8, and DB9 Bond Edition to name just a few.

But in 2015, they fancied doing something completely different, and sought to rival the likes of the Ferrari FXX-K, McLaren P1 GTR, and Pagani Zonda R with a track-only supercar like no other, and the Aston Martin Vulcan did exactly that.

With only 24 Vulcan examples being produced, we explore this truly unique car and discover its features in more detail. 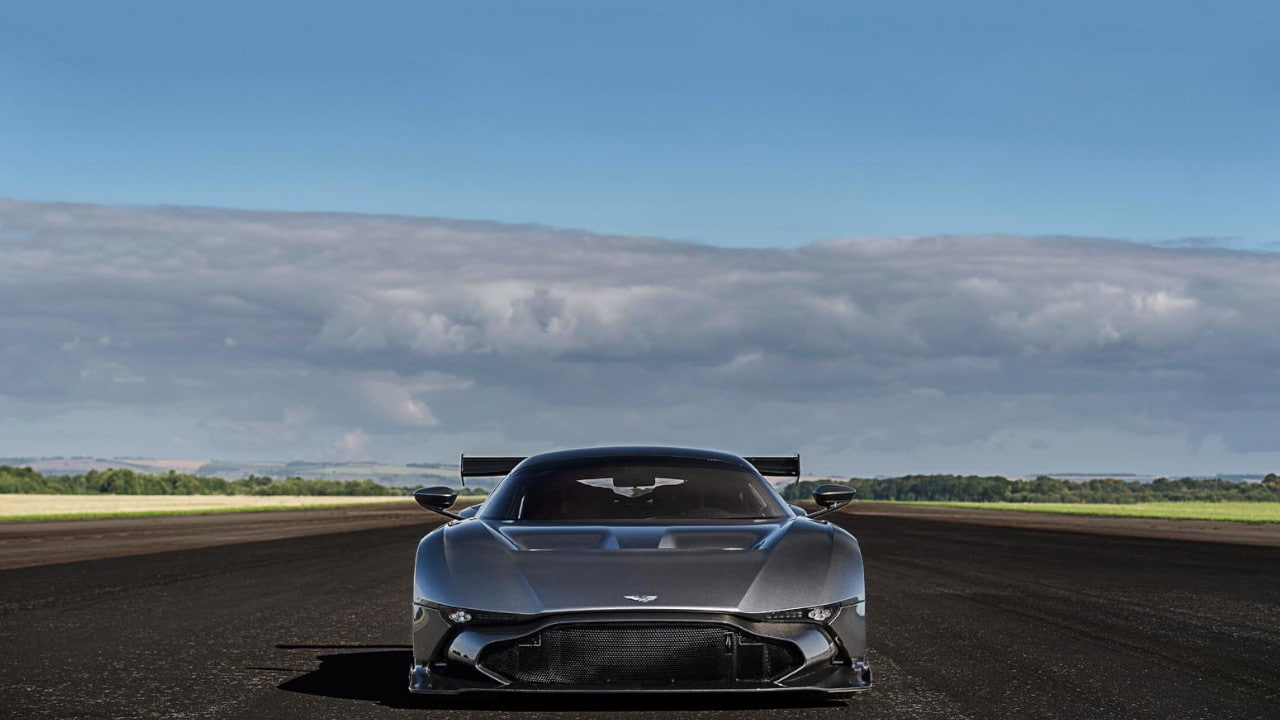 Aston Martin are no stranger to an exquisite design, but no one expected what was delivered when the covers were taken off the Vulcan. Based on the fabled One-77's foundations, the Vulcan has clear connections to Aston Martin models of old, while introducing a raft of bespoke features to ensure it fits the bill.

The most noticeable feature is the aero package, which produces colossal amounts of downforce through deployment of elements such as a large rear wing and an underbody diffuser. This allows the Vulcan to produce over 1,300kg of downforce. For context, this is more than what your typical supermini weighs.

As you would expect, the bodywork is crafted from carbon fibre in order to save weight, while the interior is almost entirely stripped out, ditching unnecessary gadgets and weights in the name of speed. A huge side-exit exhaust pipe and individual rear 'light pipes' complete what is truly an exquisite vehicle to behold.

In typical Aston Martin fashion, the Vulcan is equipped with a V12 engine. However, this particular engine was already accustomed to being driven around a racetrack, as it originates from Aston Martin's also-impressive Vantage GT3 race cars.

It did receive some major modifications along the way though, including an increase in overall displacement, which allowed the now-7.0-litre V12 engine to produce a staggering 820bhp and 575lb ft of torque. These figures allow the Vulcan to accelerate from 0 to 62mph in as little as 2.9 seconds and on to a top speed of over 200mph - not bad, considering the size of the wing bolted to the back.

It is not the Vulcan's numbers that impress the most though, as this is a car that offers a driving experience like no other. Its sonorous soundtrack, which is actually deemed too loud for some race circuits, encourages you to keep on pushing, whilst its outright ability cements its place as one of the most impressive machines to come out of 21st century Britain. 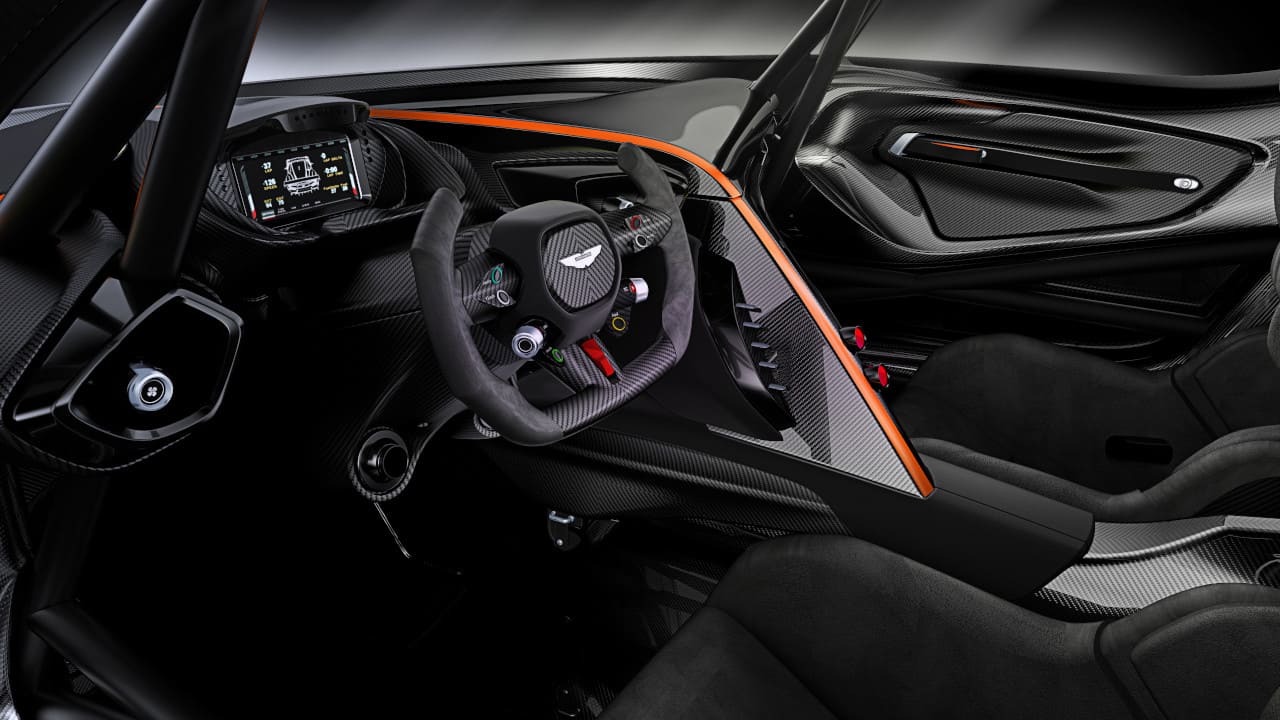 Aston Martin are well-known for interiors that are super refined and crafted to the finest detail, but the Vulcan displays a different type of workmanship altogether. Gone is much of the technology you will find in road-going Aston Martin models, and instead, there is an almost bare-bones cockpit that is more spaceship than car.

To get in, you have to navigate through a small hole in the roll cage before collapsing into a carbon fibre bucket seat that has little in the way of comfort but maximum in the driver support department. Once inside, the sight is one to behold as your low-slung driving position gives you a perfect view of the road ahead.

The carbon-clad interior provides various toggles, buttons, and switches that allow you to adjust settings on the fly and choose between three modes that determine how aggressive the Vulcan is. No corners were cut, as the Vulcan is an incredibly well put together car that offers everything you need for a blast around some of the world's finest race circuits.

Despite the incredible performance of the 'standard' Vulcan, Aston Martin were not done yet, and in 2017 at the Goodwood Festival of Speed, the Vulcan AMR Pro Package was uncovered.

Those that choose to pay the £300,000 cost for the AMR Pro Package were bestowed with a range of upgrades including wheel arch louvres and improvements to the car's aerodynamics. Acceleration times were also improved thanks to adjustments to the gear ratios that make the car even more violent out of corners.

Aston Martin Q will fit the AMR Pro Package at the owner's request, and those that have it look more aggressive than their 'standard' counterparts. This truly is the pinnacle of track cars as we know them.

What is the Aston Martin Vulcan named after?

The Aston Martin is named after the Avro Vulcan, which is a legendary strategic bomber that is credited as one of Britain's greatest engineering feats, so Aston Martin had quite the reputation to live up to.

Who owns an Aston Martin Vulcan?

With 24 Vulcan examples being produced, there are a handful of passionate owners around the world. Owners were provided with intensive driver training on some of the greatest racetracks around the world, in order to ensure they are ready to handle what the Vulcan bestows.

How much does an Aston Martin Vulcan cost?

Upon its release, the Aston Martin Vulcan cost around £2 million to purchase, and for a car that can only be driven on race circuits, this is quite the sum. However, as one of Aston Martin's greatest achievements, we are sure the owners are more than pleased with their purchase.

Occasionally, Aston Martin Vulcan examples do appear for sale at differing prices. But you can expect to pay upwards of £2.5 million for one nowadays.

The Aston Martin Vulcan was designed for track-use only, meaning that it does not come with everything it needs in order to legally drive on the road.

However, the RML Group, which is a third party British high performance automotive engineering company, converted one Vulcan example so that it was street legal, allowing that one particular owner to enjoy the Vulcan on public roads, too.

The Aston Martin Vulcan is nothing short of an engineering marvel. Its astonishing levels of power, raw driving experience, and one-of-a-kind aesthetics ensure it goes down as one of Aston Martin's greatest models. Will we ever see anything quite like it again? Doubtful, but Aston Martin seem to always have something up their sleeve.

Whilst it is unlikely that we would have a Vulcan for sale, we do have various exquisite pre-owned Aston Martin models for sale. If you would like to experience Aston Martin for yourself with a test drive, please contact your nearest Stratstone Aston Martin retailer.