A look through the history of the iconic Land Rover brand

Since the launch of the first ever Land Rover Series I in 1948 at the Amsterdam motor show, UK manufacturer Land Rover has gone on to sell more than 7 million models.

During more than 70 years of Land Rover, the off-road maker has developed itself quite the reputation, and is considered the pinnacle in off-road vehicles. Legendary 4x4 vehicles such as the Defender and Range Rover are hugely popular throughout the world. We take a look at some of the key moments in their incredible history.

The legendary Land Rover name started 70 years ago, with the birth of the iconic Land Rover Series I.

Offered in a single paint colour, light green, the Series I was launched as a multipurpose off-road vehicle and delivered just 50bhp from a 1.6-litre petrol engine, however, its 80Ib-ft of torque was impressive.

It became a roaring success for Land Rover and in 1949, the decision was made to paint all Land Rovers in the British Army's dark green as they ordered so many of these vehicles.

Ten years later, the Land Rover Series II was launched and the model continued to be made for over 13 years.

Receiving a major upgrade, the petrol engine's capacity increased to a 2.3-litre unit producing 77bhp. Whilst the diesel engine was also upgraded to the same capacity with 62bhp in 1961, when the Series IIA was introduced.

It helped Land Rover go from strength to strength and by the end of the ‘50s over 250,000 Land Rovers had been sold worldwide.

Another important milestone in the history of Land Rover, the birth of the legendary Range Rover.

A rare combination, at the time, of elegance and capability; it was the first vehicle to feature permanent 4-wheel drive in addition to the, now iconic, split tailgate.

Coming with headline features such as independent suspension and of course a new iconic V8 engine, the Range Rover was instantly recognised for its luxurious stance.

Running from 1971 to 1985, the Land Rover Series III continued to sell as well as its predecessors.

The introduction of a moulded grille and a refreshed interior were the main features which differentiated the Series III from the Series II.

However, in 1979 a significant development was made to the Series III as the Stage I V8 engine, based on the already familiar 3.5-litre engine in the original Range Rover, was born. Delivering 91bhp and plenty of torque, off-roading enthusiasts were most pleased with this advancement.

An incredible achievement was made by in the mid ‘70s, with Land Rover producing their 1 millionth vehicle, clearly a brand that was going places.

Interestingly, it was not until 11 years after the Range Rover Classic 2-door was launched that Land Rover followed up with a 4-door variant.

Just a year later an automatic gearbox was introduced to the model range and the first diesel Range Rover arrived in 1986.

With a 26 year lifespan, it is clear to see why the first generation Range Rover was such a hit and the current model continues to be a popular SUV today.

An updated addition to the Land Rover line-up, the One Ten featured coil spring suspension from the Range Rover to deliver a more comfortable drive as well as better on-road dynamics.

The One Ten followed on from the Series I, II and III.

A natural evolution of the very first Land Rover, the Ninety and One Ten gradually became more refined as they increasingly began to appeal to family buyers.

Birth of the Land Rover Discovery

Just before the nineties, Land Rover launched their first new model since the Range Rover back in 1970.

Named the Discovery, it was designed to be an everyday family car and featured a distinctive single rear door where the spare wheel was mounted.

Seating five occupants, with the option to add an extra two jump seats in the rear, the Discovery made not only a great family car but also gained a fantastic reputation as a versatile towing vehicle.

Due to the introduction of the Discovery in 1989, there was some confusion with the naming of Land Rover's vehicles so the original Land Rover gained its own name; Defender. This name was chosen as a nod to its service to the armed forces.

Retaining its recognisable looks from the very first Land Rover Series I launched in 1948, with the iconic boxy proportions, the Defender simply built on the success of its predecessors.

Replacing the original Range Rover Classic, the second generation delivered heightened luxury and introduced even more features and technology such as satellite navigation, which was cutting-edge in 1994.

Certain design elements seen in the second generation Range Rover are still recognisable in the present day such as the rectangular headlamps and the iconic silhouette.

The late nineties saw another completely new Land Rover model, in the form of their first compact SUV; the Freelander.

It was offered in two bodystyles, a conventional 5-door and a more sports-focused 3-door.

Longer and wider than its predecessor, Discovery 2 boasted more interior space, as well as improved ride and handling, thanks to Self-Levelling Suspension and Active Corner Enhancement.

Continuing to evolve, the design of the third generation Range Rover was inspired by The Italian Riva speedboat and was the first to be built with a monocoque single shell body.

An icon since 1948, the original Land Rover (now known as the Land Rover Defender) is aptly named 'the greatest car of all time' by viewers of popular television motoring programme Top Gear.

The launch of the Discovery 3 in 2004 saw the vehicle receive a massive refresh compared to the original Discovery, launched 15 years before.

Although the Discovery 3 retained its classic exterior features, it was actually an entirely new vehicle underneath.

Reimagined for the 21st century, the vehicle's infotainment received major upgrades and it even features the highly-acclaimed Terrain Response system.

The 122bhp 5-cylinder Td5 engine, which had been the standard Defender engine since 1998, was replaced in 2007 with the 122bhp Puma/DuraTorq TDCI 4-cylinder turbo diesel engine.

Further changes included the addition of a 6-speed gearbox, a safer and more modern dashboard as well as forward-facing rear seats in the Station Wagon.

Having received a new upgraded diesel engine, with stronger performance and improved efficiency, as well as an updated exterior and interior; the Freelander 2 was released in 2010.

The key difference between the Freelander 2 and the original Freelander was the option to choose a two-wheel drive variant.

A new stylish premium compact SUV, the Range Rover Evoque was launched as a 3-door but was later joined by a 5-door variant in 2013.

Being the first to feature a lightweight all-aluminium body, the fourth instalment of the Range Rover was as capable and luxurious as ever.

Receiving enhancements to the Terrain Response® system, a revised exterior design and improved interior equipment levels; the Range Rover was still recognisable thanks to its long wheelbase and floating roof.

Delivering improved fuel economy and reduced emissions the first hybrid of the Range Rover family was just as capable as its siblings.

Embarking on a 16,000km journey from Solihull to Mumbai, via the Himalayas, the Range Rover Hybrid proved its remarkable capabilities.

Modernised design features and increased efficiencies from the 3.0-litre V6 engine were the key upgrades for the second iteration of the Range Rover Sport.

Built with the spirit of the Freelander, the Discovery Sport has the same do-it all attitude and delivers a confident drive on and off-road.

Each of these outstanding vehicles were created by the Special Vehicle Operations (SVO) Team.

Luxury, performance and capability are taken to new levels to create these unique ultra-high performance SUVs.

Range Rover's may be well-known for their all-terrain 4x4 capabilities but in 2015 we saw a new 'first' from the Land Rover brand; the Range Rover Evoque Convertible.

The Z-Folding Roof added to the eye-catching looks of the stunning premium compact convertible SUV.

A design revolution was seen with Discovery 5 receiving the biggest makeover yet.

The exterior looks may be sleeker than the Discovery 5's predecessors, however, the vehicle is just as a capable as the first generation Discovery.

There are not many vehicles that can be described as both a family car and a 'workhorse' but the Discovery 5 is just that and does both jobs extremely well.

Judged the most beautifully designed vehicle on the planet, winning the World Car Design of 2018 at the World Car Awards, the Velar is effortlessly refined and capable.

Both models retain their high-quality and luxurious features, yet offer intelligent hybrid technology.

Despite the Defender ending production in 2016, almost 70 years after its Land Rover Series birth in 1948, Land Rover decided to bring back the Defender one last time as a 70th birthday celebration.

In doing so, they have created the most powerful and refined Land Rover Defender ever.

The original Range Rover Evoque took the world by storm and created a whole new segment, known as the compact SUV.

Evolving into an even more refined and luxury vehicle, the second generation Evoque was launched not only with the conventional petrol and diesel engines but also as either a mild hybrid and plug-in hybrid.

Not only does the second generation Discovery Sport embody new design elements and electrified engines, it possesses all the benefits from the successful previous version.

Reimagined for the 21st Century, the new Land Rover Defender was launched at the 2019 Frankfurt Motor Show.

Retaining its instantly recognisable silhouette and character, the iconic vehicle is capable of handling all terrains whilst providing a safe and comfortable ride.

Along came the Defender 90

Just as capable as the larger 110, the 90 is a 3-door short wheelbase version of the iconic vehicle. Powered by the same range of engines, the 90 is still capable of seating up to six occupants.

Practical commercial versions of both the 90 and 110 join the Defender family and restore the 'Hard Top' name to the iconic 4x4.

Fastest and most powerful Defender ever to be made, the potent Defender V8 90 and 110 was added to the range.

Experience the capabilities of the Land Rover range 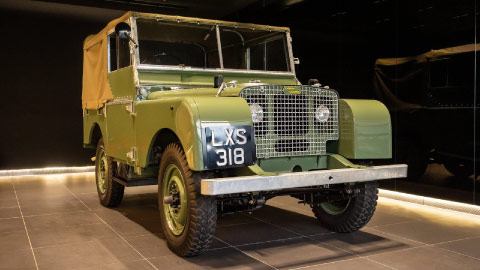 Series I Land Rover: Q&A with the Owner 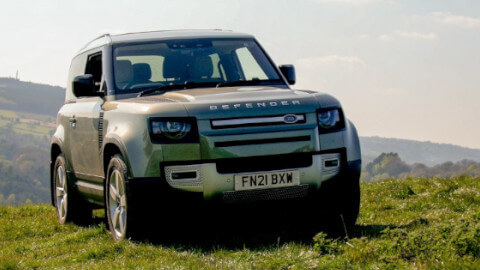 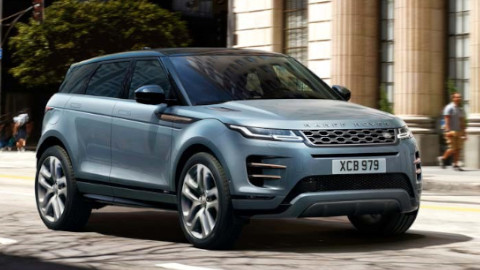 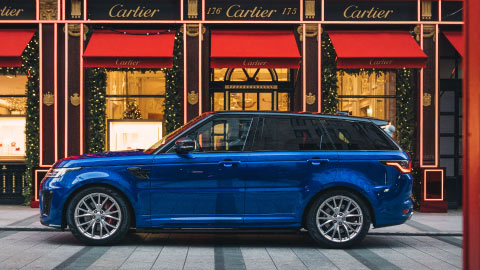