AMG are quite simply some of the finest and most sought-after letters to grace a car. For many, AMG is the pinnacle in Mercedes-Benz motor cars, the ultimate performance versions of already incredibly luxurious and exclusive vehicles.

Founded in 1967 by Hans Werner Aufrecht and Erhard Melcher, AMG started by building and tuning engines, expanding into customising Mercedes-Benz vehicles and producing unofficial accessory and upgrade packs. AMG were an entirely separate company from Mercedes-Benz.

They have since become a huge part of Mercedes-Benz history, going from an individual company which modified and tuned customers' Mercedes-Benz vehicles, to winning motorsport races and now being a fully-fledged department within Mercedes-Benz.

Today, Mercedes-AMG vehicles are the very pinnacle in Mercedes-Benz performance models, offering incredible power and exclusivity. In this blog we will take a look at the various highlights in the history of Mercedes-AMG.

Read on to discover over fifty years of AMG magic.

After founding the company in the late 1960s, AMG became more involved where they could with Mercedes-Benz. In 1971, AMG turned the motor racing world upside down, taking a Mercedes-Benz 300SEL 6.3 V8 executive sedan and transforming it into the 6.8-litre 'Red Pig'. The car cemented itself in history by finishing second at the 24 Hours of Spa, beating much lighter sports cars from rival manufacturers.

The Red Pig is celebrated as the first major milestone in the history of AMG. Today, this iconic car is seen as the foundation for the AMG bloodline and their motorsport-inspired style and heritage.

But how can success on the track lead to a multitude of successful road cars? It is no secret performance cars sell. Worldwide manufacturers even dedicate whole sub brands to them and in essence this is where the success started for AMG.

By getting heavily involved with Mercedes-Benz in racing, potential customers wanted their very own AMG motorsport-inspired cars for the road, boasting more power, more dynamic styling and of course, more exclusivity. 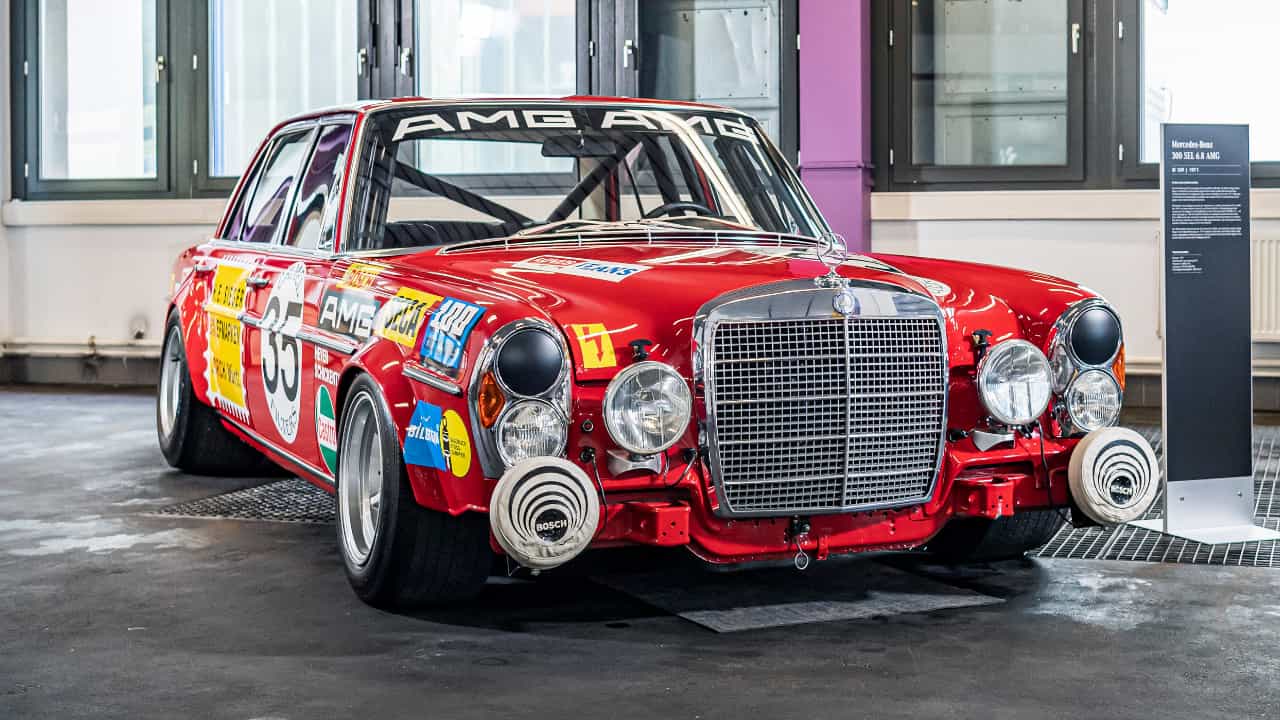 In the 1980s AMG continued to provide aftermarket and tuning enhancements for Mercedes-Benz models. However, the racing success of the 1970s had set a foundation, and now in the 1980s, excess was very much in fashion.

In 1986 you could send your W124 Mercedes-Benz E-Class to Affalterbach and AMG would do their thing, creating a car which was given the nickname 'Hammer'. Not only was the Hammer cool, it was stereotypically 1980s, featuring wide arches and power pumped up to 375bhp - which was thanks to a 6.0-litre V8 engine. It was hugely fast as well, with 0 to 62mph happening in around 4.4 seconds which is quick today; bordering on crazy back in 1980s.

You could also get AMG to give your 300E Mercedes-Benz the same treatment, meaning that the 300E AMG was the fastest production saloon car in the world.

The late 1980s also saw the first AMG model to be made available through Mercedes-Benz dealerships with a full warranty, in the form of a 225bhp 190 E AMG. This again was another huge step in AMG history.

Officially, the collaboration with AMG and Mercedes began in 1990 before Daimler-Benz took a controlling stake of the company in 1999, leading to AMG versions of almost every Mercedes model.

The C 36 AMG of 1993 was the first AMG car to be developed by both AMG and Mercedes-Benz. From looks alone, it was a much more subtle affair than the decade before when AMG badged cars seemed a lot more excessive.

The Mercedes-Benz input sure made for a classier AMG package. Of course, the motorsport foundation of the 1970s was still evident thanks to 276bhp on offer, via a luscious inline 6-cylinder engine, good enough for 0 to 62mph in circa 6.5 seconds. 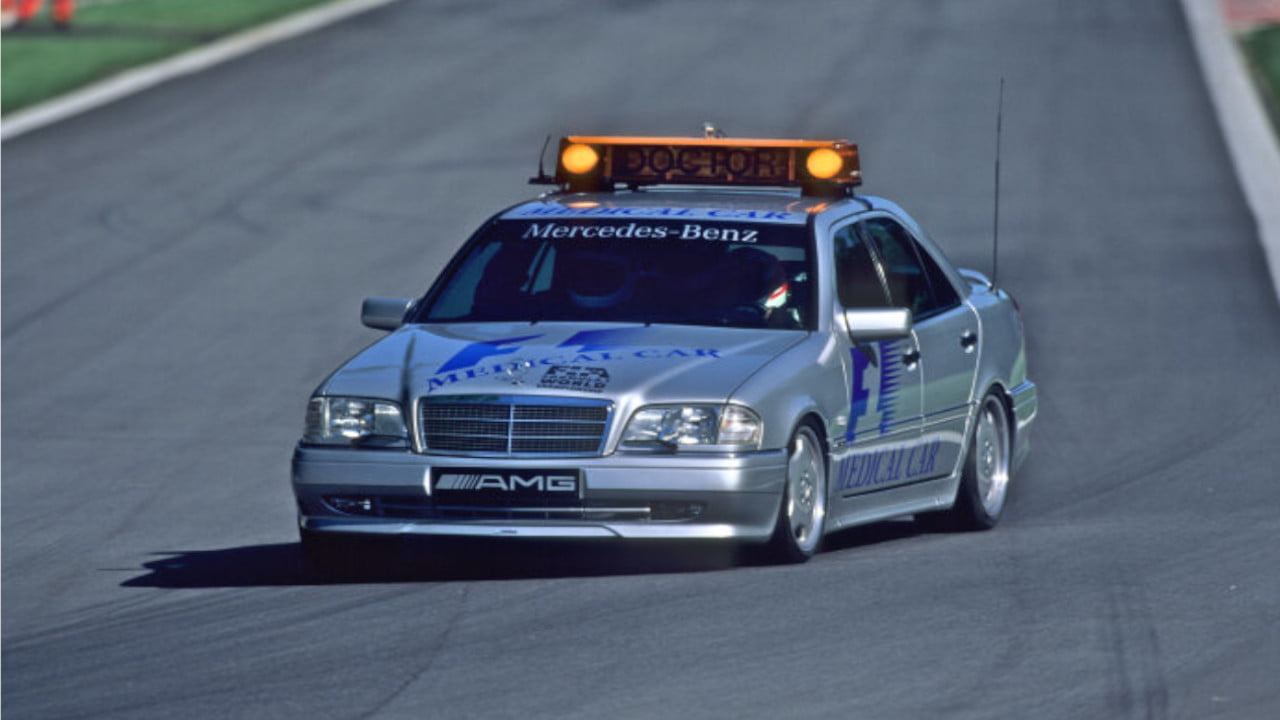 The millennium came and Mercedes-Benz AMG models still proved popular. The E 55 AMG (E-Class) came along in 2002 and was somewhat of a super-saloon, allowing for incredible comfort, as well as unbelievable performance when required.

The mid 2000s was a very significant time in the history of Mercedes-Benz and AMG, as this was the year the very first AMG Black Series model was launched. Black Series models are the best of the best and only six have ever been created as of 2021.

The first Black Series AMG came in the form of the Mercedes-Benz SLK 55 AMG Black Series. Beginning as a Safety car in 2004/2005 the road car came about in 2006. Despite its compact proportions, Mercedes-Benz and AMG managed to shoehorn a 5.5-litre V8 in the SLK, resulting in 400bhp and 0 to 62mph in just 4.5 seconds. 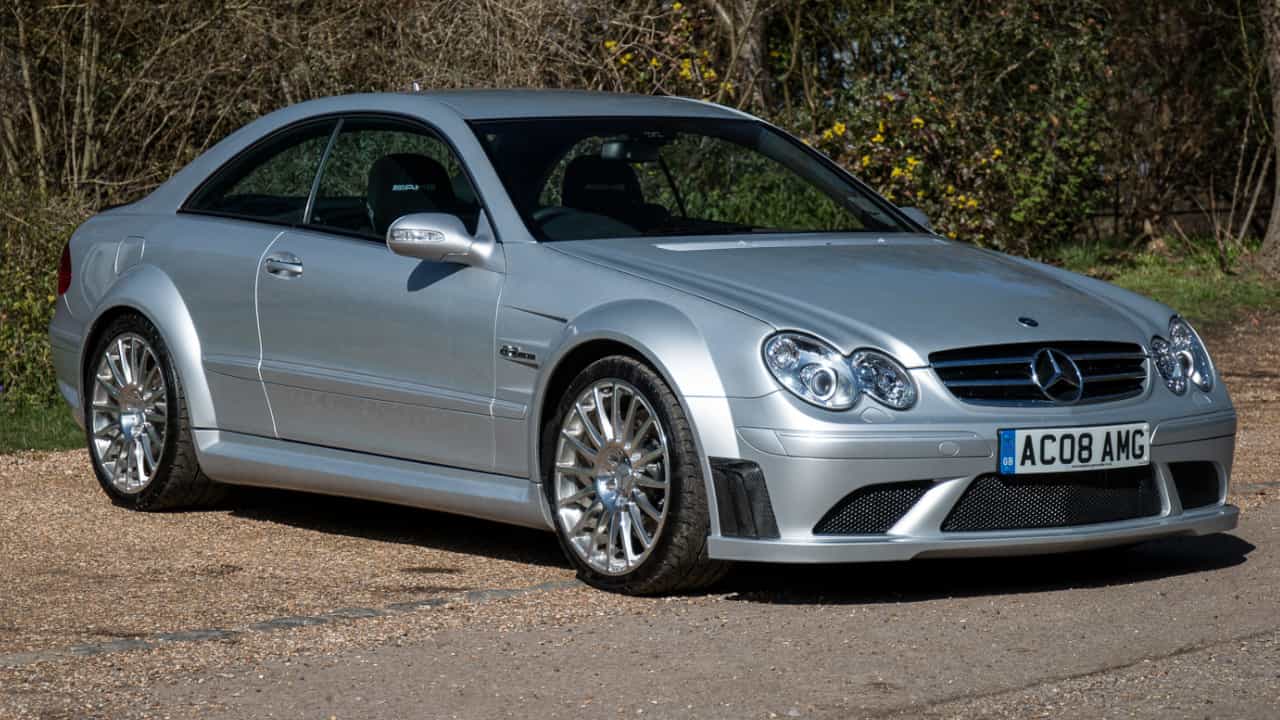 Perhaps one of the most important decades in the AMG story. 2011 saw what is now arguably one of the most celebrated AMG models in the form of the C 63 AMG Coupe. This was the last C-Class AMG model to feature a naturally-aspirated engine and for that reason these cars are starting to become rather sought-after.

2011 also saw the next instalment of the Black Series AMG, the 512bhp C 63 Black Series. A car capable of hitting 62mph from standstill in just over 4 seconds and go on to a top speed of 186mph. It certainly looks the part with the motorsport inspired wing and aggressive canards. 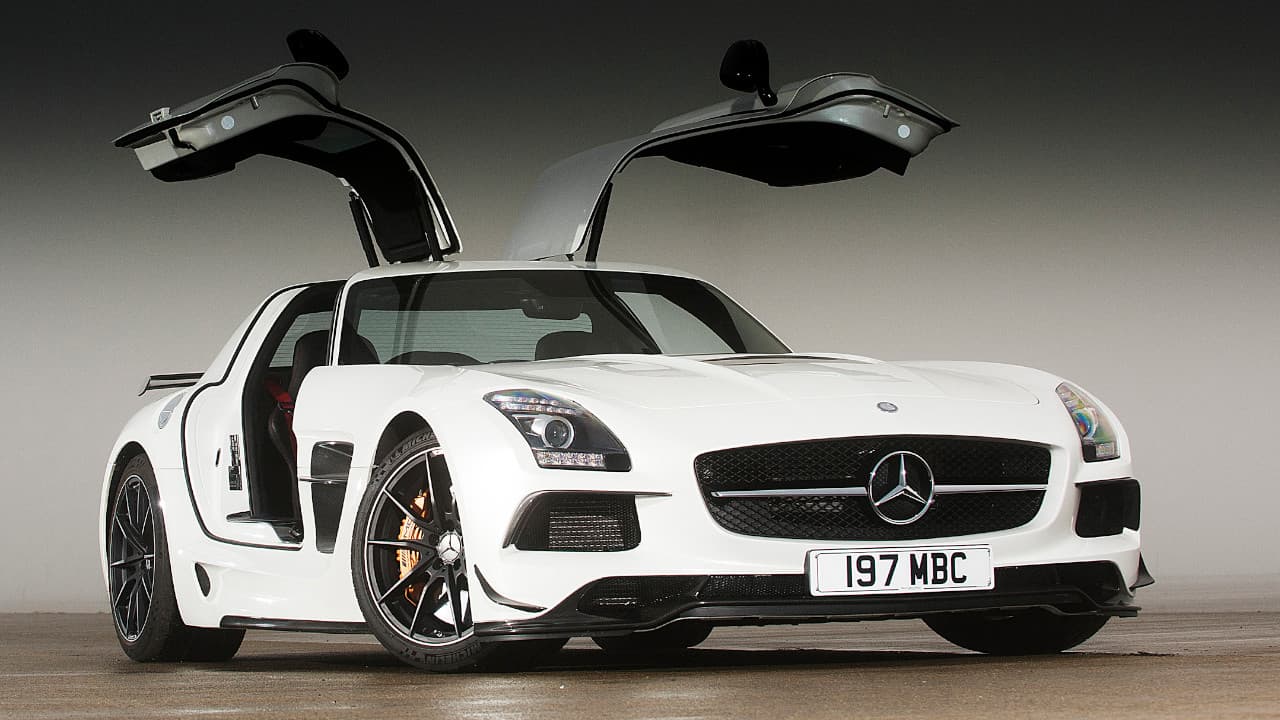 With a twin-turbo 4.0-litre V8 heart and looks that emulate Mercedes-AMG racing cars, this is the most track-focused AMG product yet - tracing back its heritage to the Red Pig from the start of our timeline.

With 0-62mph happening in just over 3 seconds, and with a 202mph top speed, this is without doubt one serious piece of kit born for the racetrack - which happens to be road legal too. 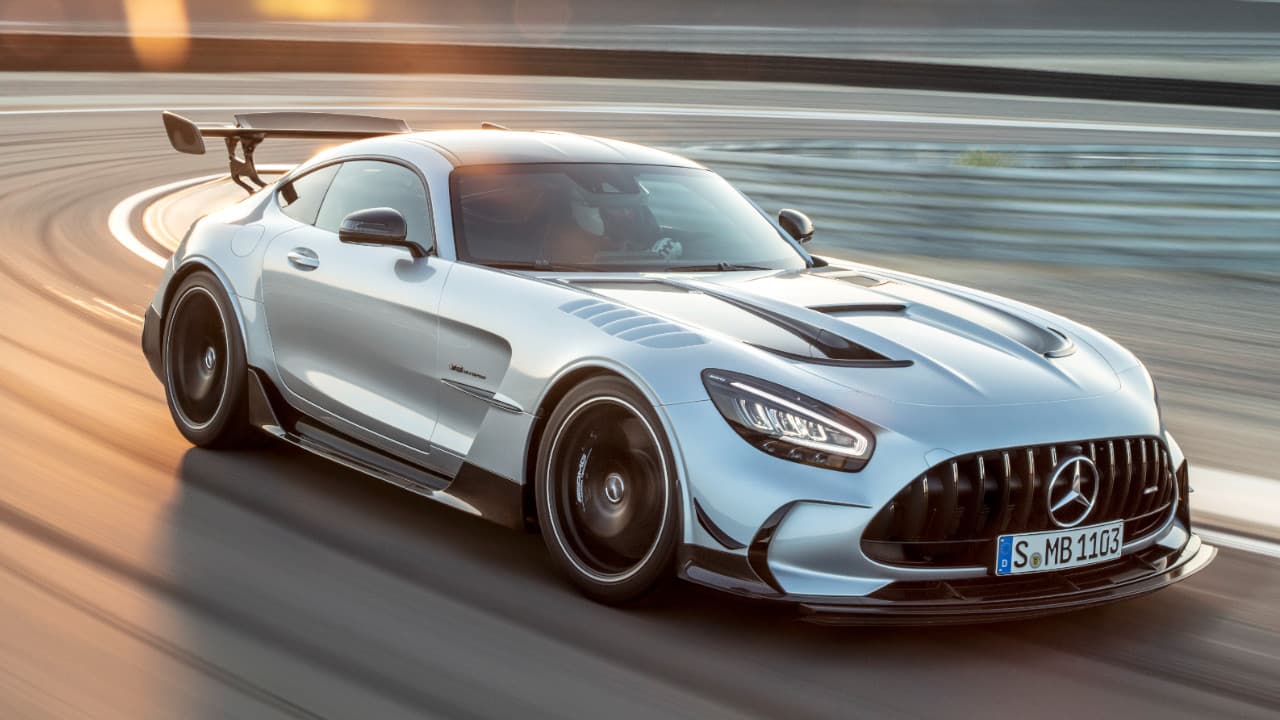 Discover your very own Mercedes-AMG?

Designed and developed in Affalterbach, all Mercedes-AMG models feature striking performance upgrades and re-stylings, with the AMG badge being found on everything from the A-Class to the Mercedes GP Petronas Formula One cars in which Lewis Hamilton has won multiple world championships.

Unfortunately, we do not stock Lewis' F1 car, but there are many models in our inventory that can still cut it on a racetrack, thanks to their motorsport-inspired heritage. Being a Mercedes-AMG, they are also incredibly comfortable and luxurious on your average UK road too.